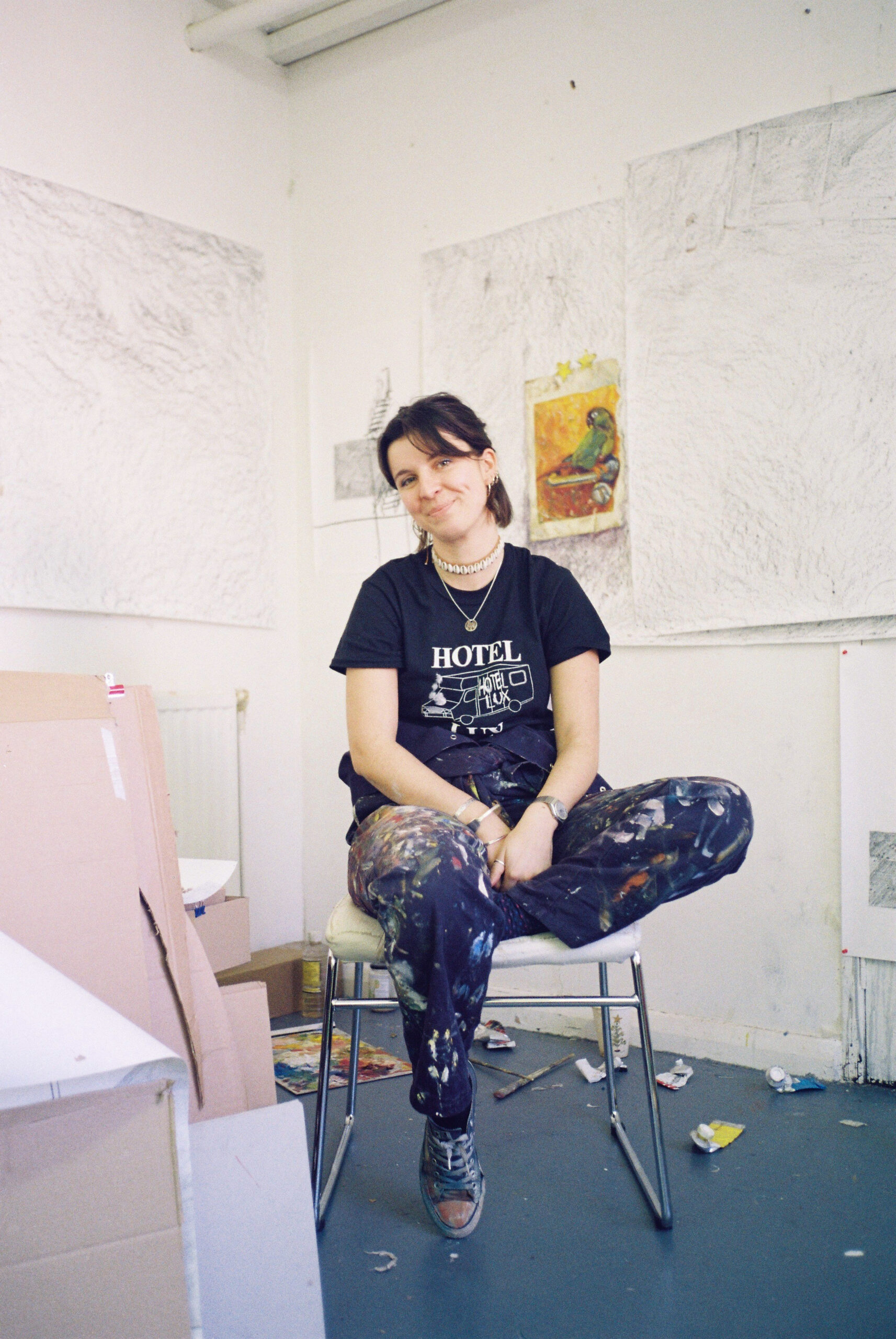 Based in London, Willa Hilditch works mainly with drawing and painting. Her studio practice revolves around found objects, paper sculptures, studio staples, sketches and notes, or functional interior/exterior devices such as switches, that all find their way into the pictures through her skilful hand. Her paintings, and especially her drawings, often appear ghostly: in them, recognizable things gain a fluid symbolic force, through the lines that bring them to an uncanny form of existence. Paper props and objects that work as elements of flatness and volume produce a multidimensional space with roughly apposed layers. They evoke the haunting power of the in-between through a clash of scale in the physical space where the viewer sees them, and the elements of the picture themselves, that could very well have been shrunk or, conversely, blown-up.

Willa Hilditch’s studio practice is rooted in her daily walks to and from her studio, where she gathers material for her work, often in the ‘non-places’ spilling here and there in the urbanscape. Nonetheless, it is not the grandeur of empty spaces that attracts her attention, but rather the minute glitches in them, like those she experienced when playing older versions of video games such as Halo or Mario Bros. Those are often unappealing or quasi-invisible remnants of the flux of life, such as walked-on chewing gum, prompting her to find that ‘the routines of others are evident in the existence of their waste’. The flattened memorabilia of strangers, or the architectural stuff that enables life to carry on, such as the lonely thin pipes that seem to adorn buildings while carrying their discarded matter, are reminiscent of virtual imperfect spaces in early gaming.

Although figural and masterfully rendered, her drawings bear the trace of their production: it is mark-making that make them come to life. Willa Hilditch draws profusely, using different techniques and tools such as rubbing and sketchbooks. This indexical architecture of the drawing mirrors the interest she has in interstitial spaces, particularly in our own houses and buildings. Her work shifts the attention to often unseen or discarded details of the structures that make-up our eco-systems: what is happening in the gutters, behind the radiators or inside them? Like drawings are an accumulation of mindful gestures, the spaces we inhabit, be it virtual or physical, have layers of narratives and detritus.

The Worlding studio became the object of a new series of drawings, bearing elements of the architecture of the space, its windows and functional objects, associated with folded paper shapes of a bigger scale such as a structure in the shape of a house. 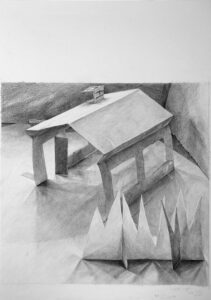 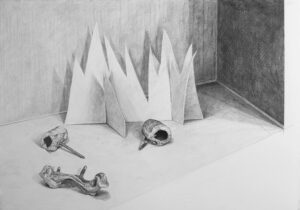